I had a good day out yesterday. Apart from the fact I took the wrong key with me and couldn't get into the cottage.........which is still in one piece. We fished Lough Skean for a couple of hours with no luck. After that we visited the cottage, looked at lough Mealagh but didn't fish it due to awkward access, tried the Boyle river, again with no success. By then it was almost 1pm, so we moved down the road to a small lake and recast our baits before boiling the Kettle for our tea.
By the time the kettle boiled I'd had two pike on the deadbaits...it's worth being mobile when fishing. I got another fish over 10lb in the next hour but then struggled, eventually getting a jack on a spoon. I lost a fish earlier on a plug too. Noel got one fish on a spoon. Four fish was a nice result for 3 and a half hours though, and it shows the value of the van, allowing fast movement from venue to venue with rods set up and ready to go.

Today I finished off my portrait, so I am tired but happy. I am too tired to sort out a photo of it though, maybe tomorrow.....
Posted by Greg Long, artista at 5:53 PM No comments:

My portrait as of today... 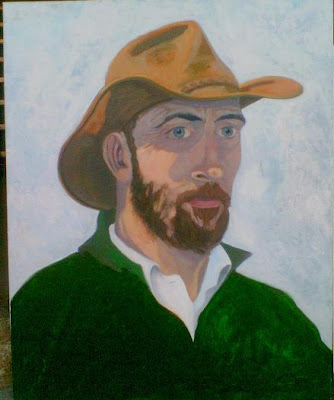 I need to work on my clothing, but the base needs to dry....and it is slow. Hopefully it will be dry by wednesday, I'm off up to sligo tomorrow to visit our cottage. I will do some pike fishing too while I am up there, Noel is coming with me. Two birds with one stone and all that.....I was going to go fishing anyway and since the pike fishing close to home has been so poor I decided to travel further afield and since I haven't seen the cottage since before all our storms I needed to do that anyway.
I spent time today doing a couple of small acrylics, these are below.

1 Donegal, near Malin, eight by ten inches
2. Benbulbin, across Sligo Bay eight by eight inches. I like them. 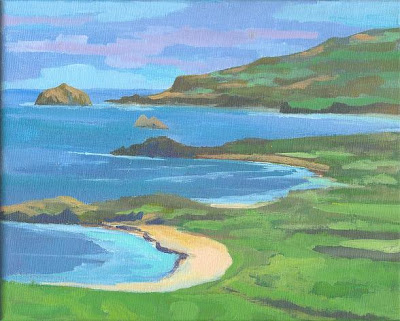 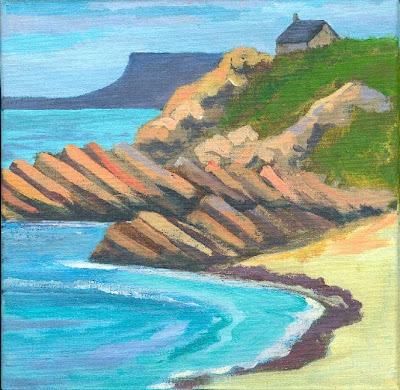 Posted by Greg Long, artista at 8:21 PM No comments:

I have repainted my portrait twice since I last posted. I was not happy with it. I am still not totally happy with it. I have not done any work behind the portrait yet either.
I find the fact that I need to finish this painting in the next week or so is creating pressure as such. If it is not just right I need to rethink my approach. I was intending to look at a hat shop window as a subject, but when I went to the shop I found it has closed down.

I must get a few materials this week too, I'm short of paint, I need some unstretched canvas to build a large one. I may invest in some brushes too since the ones I have are getting the worse for wear again. My spare ones were used for acrylics, and surprisingly the acrylics seem to damage the bristles more than the oils, consequently I need new ones now. I hate using worn down brushes, and I tend to use long filberts for much of my work. I have no sables left either, I use these for fine details in oil paint, and that destroys them, leaving me with none for watercolours....I must get a few artist WC tubes too, the box of pans don't really give a strong colour. ..........I must make a few bob to pay for all this!
Until then I will probably just buy the necessities..
Posted by Greg Long, artista at 10:25 PM 1 comment:

I went down to Cork for a few days. I took a wander around the lough, but saw nop carp, just two large eels and a LOT of ducks etc..A nice relaxing time was had, followed by a few hours Cod fishing on the way home, in the rain....It hasn't stopped all week!, the cod fishing was fun. I caught a few including a couple of four or five pounds which I kept for the table. (I put the others back). When the tide slackened off I was in-undated with crabs, stripping the bait in minutes so I quit and set off home early.
Yesterday I went into the studio and had another look at my portrait. It wasn't good. I have had to repaint the nose and mouth, alter the face line and do other remedial work. I don't know how I missed it earlier...I won't post a pic yet...I haven't taken one.
The weather is now improving, the high winds have dropped, the sun is out and the temperature is falling. We have had so much wind and rain since autumn it must be a record.
There hasn't been much chance of plien air painting anyway!
Posted by Greg Long, artista at 9:20 AM No comments:

A work in progress...Narcisus at work again.. 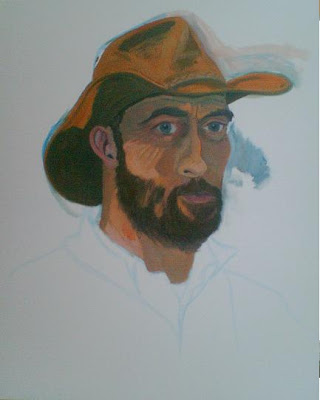 I have started my piece for the Portugeese exhibition, The subject is to be hats or shoes. I decided to paint my own Hat....in situ! Not that I am a Narcisus or anything. I just like painting portraits occaissionally....and I'm a very cheap model!!
The painting is 30 inches by 24 Oil on Canvas. It is coming along quite nicely. The photo is quite poor though as it was taken under artificial light without a flash, but it gives the general idea.
I purposely did not do any work on the background or my clothing, this is because I am not sure wether I want to put my studio in or just frame my hat with a suitable colour. Added to the fact that until I decide this I do not want to paint my clothing and then have to repaint it due to the colours I was wearing. I may try to get more work done tomorrow, but I have quite a bit of running around to do before I go away thursday morning (at 3.00 am). This includes getting some bait for a bit of Codling fishing....I hope to do some Friday night before coming back to Dublin.
Posted by Greg Long, artista at 7:17 PM No comments:

I did some shopping today. I dropped into Kennedy's on Harcourt st and bought a few canvases and some paint to keep me going. Sadly my painting was still on the wall of the exhibition, with no red stickers in sight. It looked like the exhibition had been poor sales wise all round though. This evening I booked my flights to Tunisia for the festival in September. I now have to get busy on work for the exhibition in Portugal. I will be working in the studio tomorrow...
I was busy today though. I disposed of the tree that had blown down in the garden....3 trips in the van did the job. JOBS.... It never ends, there are always things needing to be done ... interfering with work and keeping me busy.
I wouldn't mind but I'm not even fishing!

Mind you I'm off to Cork for a couple of days next week...weather permitting I might do a nights Cod fishing for a change.
Posted by Greg Long, artista at 12:49 AM No comments:

time is flying by.

I can't believe it's the 9th already!
I have nothing done as such yet this year. I have an appointment for a medical checkup tomorrow but apart from that I have nothing organised yet. Although I was in the studio a couple of times I havent started painting anything yet....I havent even finished tidying the studio yet.

The strelitzia/birdofparadise seeds I planted just before Christmas have started sprouting up..I have over twenty seedlings so far. Not bad for my own seed, artificially fertilised in the conservatory last summer.
I will try to post later in the week when I have a bit more news, or at least maybe a painting or two to show you.
Posted by Greg Long, artista at 7:43 PM No comments:

it's 2007 already! Another year is over. It was an interesting, and somewhat successful year for me. My art did quite well, bringing more international recognition.
As someone I'd consider just an ordinary 'joe', I have done well. I have represented my country at international level both artistically (work) and as an angler (competitively). Yet I don't believe I am truly deserving, I have a tendency to self doubt artistically.....like most artists.
For the coming year I am going to have to try to use my success to increase my earnings a little more, the business end is sadly lagging behind the recognition of my work....
....buy now! while you can afford me!....
Posted by Greg Long, artista at 6:34 PM No comments: