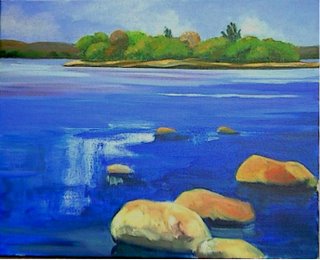 Hooray! I could get in and out of my studio today...they had left room for my sign too.......
I have photographed the painting of Rabbit Island. I put the final touches to the sky earlier in the week. The photograph doesn't do it justice as usual...unless it improves on your monitor..lol.. Obviously the detail is not in the photograph when uploading for the web, so much of the character of a painting is lost.
I started work on the 2nd Larger piece too. The sketch for the planning looked quite nice also, but I didn't take a picture of it. As you can see, I have blocked in the basic areas of darks and washed in the water areas. The canvas is 30 inches by 24 inches. On the easel it 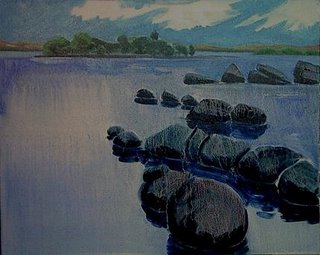 looks quite well. It has great depth so far. I hope it will keep it as I progress.

Yesterday I travelled to Lough Ennel. The weather was pleasant, but due to lack of any wind in the afternoon fishing was difficult. When we arrived we found the boat full of water...literally full..it hasn't been baled (emptied) in months and had filled up with all the rain. It took us an hour to empty it and then push the boat, which had been towed up the bank for the winter, back into the lake. That done we tackled up etc. fitted the outboard and set off about 12.30. We had a nice gentle breeze for about 2 hours, but no luck with the fishing. The wind then died and we continued fishing in a flat calm until about 8 pm. There were plenty of duckfly or buzzers around but very little activity from the trout. I did managed to catch two small fish, the best about a pound and a half, .7kg a nice takeable fish down the road on lough Owel, but Ennel fish are bigger with a 14 inch size limit as opposed to the usual 12. All Ennel fish under three pounds are considered small!. The day was enjoyable anyway, any day on Ennel with fish is a good day, it can be a very difficult lake. The difficulty of catching on Ennel is well offset by the size and quality of the fish when you do catch them though. I caught one of the fish on a small wetfly immitation of the duckfly, black body, soft black hackle and an almost white, grey rabbit fur wing. The rabbit-fur wing moves in the water giving the impression of life more than a feather wing. The second fish, the larger was caught on a buzzer pupae imitation cast ahead of the fish while it was sipping down trapped emergers in the early evening after a patient wait for it to come within casting range of the boat. It is almost impossible to get close to fish in flat calm conditions, and when you do because there is no wind to create a drift the fish are not travelling upwind but swimming around aimlessly in all directions.... But conditions like this make success much more enjoyable. I'm looking forward to my next day out.