My Studio in an unusually tidy state... 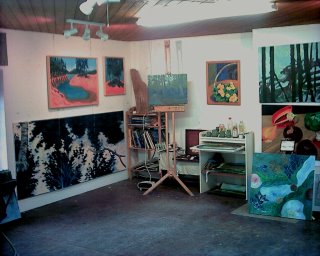 I spent time tidying my studio again. Hence my work table has no brushes in jars etc. my palette is empty and the painting on the easel is the one I was working on two days ago. This is of the working corner of my studio, the three works to the left of the easel are the ones that came back from Florence. That is why the studio got re-organised...

....you can see the edge of a window towards the left of the photo, behind to the right there are another two windows these are also mid level one of which can be seen in the second picture.
which was taken in the natural light of a winters 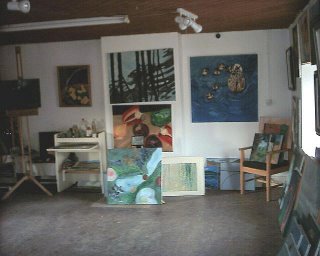 afternoon, the two windows on the right face North and obviously the one on the left faces south.. but the light is quite poor without both flourescent tubes in daylight (colour 84) and the spotlights dotted around the ceiling as can be seen in this second photo.