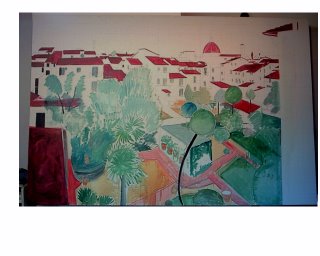 Stages 3 to 5, hotel castri painting.
I started this morning by blocking in the rest of the garden area with thin washes of blue/greens.

That was followed by ground washes (with thinned down paint) on the pathways and gravelled areas. 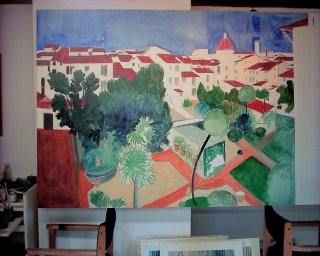 Stage 4 entailed the canvas being turned upside down, so that I could lay a blue wash on the sky area without the blue running down across everything else. Obviously with the canvas upside down the drips just fall off the top of the canvas instead. When the sky area had dried enough I turned the canvas again before laying a second wash over some foliage areas and altering the pathway on the right. A second layer was also layed over tyhe gravel area.

For the 5th stage I have laid some colour onto 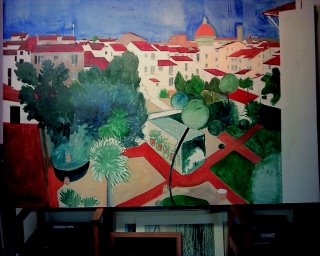 some of the buildings, and laid foundation paint on the hills behind.

I also altered the center foreground area, removing the portion of the tree and leaving just the grass area showing. Portions of the buildings have been tweeked also, generally helping the whole to gel, notably on the left hand edge. I also added more defined colour to other foliage.

This stage has now lost a lot of the freshness that the painting had, but the darkness is needed to allow me to add lighter brighter shades after.

I will leave the painting now until Monday. I have a fishing competition tomorrow...It is to be held in Maynooth fishery, but it is more for fun and a 'get-together' prior to our fishing season starting on March 1st..and our club AGM. in February.
Posted by Greg Long, artista at 8:13 PM