Lough Sheelin is kind to me...

I had a great day on Lough Sheelin. There was little doing for most of the day, but at 4.30 I hooked and lost a trout of about 3lb...I knew I was likely to lose it though as it kept shaking it's head, so I knew it was lightly hooked, and eventually the hook pulled out during one of it's runs. Ten minutes later I rose and landed a fish of about 1.5 lb on a wet Daddy (crane fly) After another 15 minutes I had a follow to my tail fly, a pearly invicta, and on seeing the bow-wave of the fish I stopped the retrieve and momentarily later the fish took the fly and I hooked it. A beautiful wild brown trout of over 3.5 lb weight. We never saw another fish for the day.....but I wasn't to bothered. It was great to get to grips with the couple of good fish, and all in the one drift, on different flies. 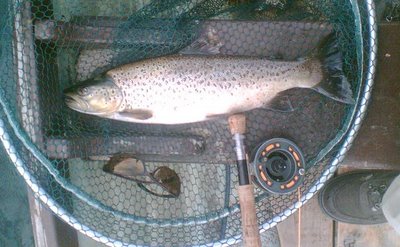 I took a quick photo of the bigger fish, my glasses and size 10 boot (lol) for scale...It was a lovely golden colour rather than the normal silver of the limestone fish. I measured it also 49 cm. about 20 inches with a tail like a shovel.
I've had my luck today....poor Noel never even moved a fish in the other end of the boat, while I connected with two crackers!.