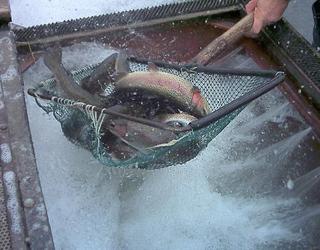 I am back from my fishing trip, It started with helping with a fish stocking at Blessington Lakes,

We stocked about 1500 fish, all rainbow trout. The operation took about 2 and a half hours, with half a dozen helping to distribute the fish around the lake (about 3 miles were stocked), the lake is 9 miles long formed in three arms, the lower arm is the area that is stocked with trout, the other two arms have spawning rivers entering them and are more or less left to stock themselves.

When the work was done three of us took a boat out and headed across the lake to do some fishing. After an hour or two fruitless drifting we pulled up on the shore for some food and waited hoping for a bit of wind to improve our chances as there was very little ripple.

As you will see from the photo we had the cloud cover but not the breeze. We eventually went back out for an hour and I managed to catch two fish after a change of flies, and by varying my tactics. Niether of my two companions managed to catch though so the afternoon was a bit dissapointing.

The fly that did the trick was a little jungle cock Dunkeld, fished on the point of a three fly cast, with a big bushy fly causing a wake on the top dropper to stimulate the interest from the trout which often take one of the following flies below the surface.

If not you often find you will get some fish splashing at the top dropper itself.

I am ready to go back to my studio tommorrow now. Time to do some work I think, now whether I tidy the studio or do a bit of painting remains to be seen, I will work with a brush anyway, if not the paint brush the sweeping brush will beckon!!

Hi Greg,
Forgive my ignorance (as I am a city slicker), but why were you distributing the fish around the lake?

Hi Nina, If you put all the fish in in one area they will be easily caught and more importantly there will be too much competition for food. By spreading the fish around the lake it gives them time to get acclimatised and allows them to find areas of good feeding.