A Good Day's Work, and a surprise visitor

I did it!
I actually managed a days work..It is hard to start when you've been away for a while. Even more so when I can't just find something to create that spark. I was rummaging through sketches, seeking the one that lit the fires of creativity.
After an hour I glanced out of the back window of the studio, this is the view that I normally see:- 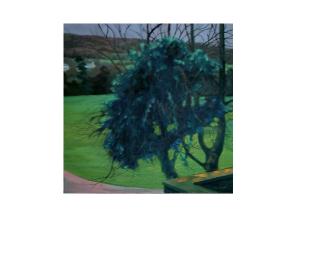 But the construction of the stage (for the weekends rock concerts) was well underway and the scaffolding was almost fully up. That gave me the idea for a painting. I was in the studio for the last concert, Oasis, because Eoin my son was at it and I was giving him a lift home. I remembered how the spotlights shone out into the darkness over the crowd. Using this image and contrasting the normal peace and quiet of the park with the beat and sounds, lights etc. created by the concert I started creating a painting of the concert.

This is a rough idea of what I am doing as I did not have a camera to show the work in progress.

It is an image built on the computor so obviously the colours are very flat but you can get the Idea of what I am trying to do. I'll show an illustration of the work when I am happy with what I have done.

I was working away sketching out my Idea when I had a surprise visit from another Artist I hadn't seen in 7 or 8 years, so we had a pleasant afternoon discussing art and common aquaintances, (gossip!) amongst other things. The other Artist is in the process of moving studio, she has spent a number of years working from home but is finding it increasingly difficult now her family are getting old enough to get into mischief!. Finding a studio that is affordable is almost impossible, anything within 90 minutes of Dublin is at least 750 euro ($1,000) a month, plus insurance, light, heat, etc.

Working away in my studio I don't have the interaction with other Artists that I'd like, but I find many of my Artistic friends and colleagues that once worked in group Studios, or the City centre areas beside coffee shops etc. where they could meet, have had to move outside Dublin to continue. The few I know still in Dublin are mainly those of us who have been established in the suburbs for a number of years, but we are dissapearing fast.

We were discussing a group studio which has moved out from Dublin to Wicklow, seemingly because the Artists could afford to buy/rent houses outside Dublin but not in the City. The upshot of this trend is that the Bohemian lifestyle of Artist's is dissapearing from our culture, Artists are becoming more of a Rural occupant, less bohemian more vegetable patch self-sufficient type, more likely to be feeding the chickens in the evening than discussing Art around a Cafe or Pub table. A sad state of affairs.

Maybe I'll start an Organisation S.O.B. Save our Bohemians.